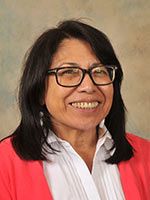 The ventral tegmental area (VTA) dopamine neurons are intermixed with GABA and glutamate neurons. In this talk, I will provide an overview on the characterization of VTA neurons that release GABA, glutamate or both. All VTA glutamatergic neurons express the vesicular glutamate transporter type 2 (VGluT2; Yamaguchi et al.,2007 ). The VTA VGluT2 neurons establish local synapses as well as synapses outside the VTA. Within the VTA,  some VGluT2 neurons establish excitatory synapses on mesoaccumbens dopamine neurons, and the local glutamate release from VTA VGluT2 neurons drives the firing of mesoaccumbens dopamine neurons, the release of dopamine in nucleus accumbens,  and drives place preference. These findings indicate that contrary to the idea that all glutamatergic inputs to VTA are from neuronal outside the VTA, and determined that glutamatergic neurons (expressing VGluT2) within the VTA through their local connections play a role in reward. We had also found that the VTA has a subset of VGluT2 neurons that co-expresses the enzyme for the synthesis of GABA (glutamic acid decarboxylase, GAD) and for its vesicular transporter (VGaT; Root, Mejias-Alponte, Zhang et al., 2014).  Single axon terminals from these VTA VGluT2+GAD+VGaT+ neurons establish independent glutamate- and GABA-releasing synapses on the lateral habenula neurons. Although both glutamate and GABA may be present within the same axon terminal, they are released from different pools of vesicles.  By cell-specific mapping, we had determined the VTA distribution of neurons that co-express VGluT2 and VGAT (VGluT2+ VGaT+ neurons), neurons that express VGluT2 without VGAT (VGluT2+ VGaT- neurons) and neurons that express VGaT without VGluT2 (VGluT2- VGaT+ neurons). By cell specific targeting, we had determined distinct signaling among VTA VGluT2+ VGaT+, VGluT2+ VGaT- and VGluT2- VGaT+ neurons in motivated behaviors.